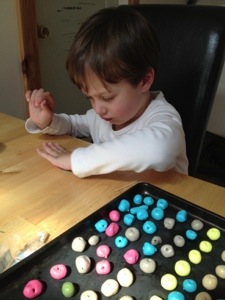 Last week Bebito and I set about making his gift for his much loved Grandma (my Mum). I asked him what he wanted to make and after some thought he decided upon a necklace. Kellie put me on to this great tutorial on making a clay necklace. I knew it would be perfect.

Only, the thing is, that I forgot to account for the difference in temperatures…the tutorial and indeed the clay was listed in Fahrenheit not Celsius!!! I popped the beads in the preheated oven and a few minutes later returned to the kitchen where there was smoke billowing from the oven. And oh boy, the smell!!!!

Let me say, I’m usually quite good in a crisis. I’m clear headed and calm and I leave my freaking out til later. EXCEPT when it comes to fire. I am not good with fire. So I did what any normal person would do and rang my husband. Because of course that was going to fix it! I mainly wanted to check whether it was a good idea to open the oven. I was worried adding extra oxygen to the situation would be ok and not burn the whole house down! My Mr was the rational man he always is and talked me through it. He sometimes must think he’s married to a complete ditz! Anyway, major crisis was averted.

I was however worried how Bebito would react. He has his Mama’s propensity to get a bit upset when things don’t go according to plan. He asked a million questions but actually coped well. He actually thought it funny more than anything, especially when the drama died down.

That night as we reflected on his day together he asked if we would try again. He knew we had more clay and we hasn’t actually achieved what we had set out to. I really didn’t want to! Fire! I made a mistake. One that could have ended terribly. But it didn’t.

Sometimes the teaching moments in parenting are just so obvious and this was one. A mistake shouldn’t stop you in your tracks. You should pick yourself up, try again, learn along the way. I had to set that example. So, we did it again, this time, only better and he made one for me too (his idea!). One that I will proudly wear for the rest of my days as a reminder of how much he is teaching me as much as I am teaching him.

1 thought on “Lessons in parenting: the dealing with setbacks edition”